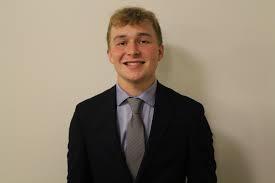 Brother Karson Janssen passed away in November 2021, suddenly by an undetected degenerative heart condition at the Lambda Chapter House (University of Minnesota). After his untimely death, Brother Janssen’s family wanted to honor their son and brother’s memory. They established the Karson Janssen Memorial Scholarship Fund, which proceeds from a series of fund raisers and activities will go to.

Lambda Chapter brothers teamed up with the Janssen Family and Martin County West (MCW) schools in Minnesota to hold the first Karson Janssen Memorial Hoops for Heart project. The mission of the project comes in multitudes, but are simple: one, to give scholarships to others to encourage personal growth and a healthy lifestyle; two, is to provide CPR training in the Martin County West and the University of Minnesota communities; three, is to raise awareness that it is never too early to take care of your heart. Don’t overlook, don’t assume; and four, Brother Karson’s life motto — be nice, be neat and be humble.

The Hoops for Heart event was held February 18 during the Martin County West Mavericks’ girls and boys basketball teams’ games at the junior high building in Trimont, Minnesota. This is also during American Heart Month, making the fund raiser timely in heart health advocacy. The theme of the game is “Red Out,” and all who attend are encouraged to wear red in support of the American Heart Association’s message. The AHA will have a booth at the game and will be handing out a limited number of red t-shirts in honor of Brother Janssen and will be providing heart health information.

During the halftime of the boys and girls varsity games, there was a silent auction, bake sale, face painting and a pass-the-bucket fundraiser, performed by Lambda Chapter and Brother Janssen’s former classmates at MCW. Prior to the Hoops for Hearts event, K-12 students at MCW sold red paper hearts, which donors either wrote the names of a loved one on, or a heart-healthy message. MCW basketball players collected either a flat donation or a donation per shot for a free-throw shooting contest. All of the proceeds went to the Karson Janssen Memorial Scholarship Fund.

Brother Karson Jansson was a sophomore at the University of Minnesota studying agricultural communications and marketing with a minor in sports management before he passed.