Fitness and exercise have always been a main staple in my life. From playing highly competitive sports through high school to running marathons as an adult, staying in shape has forever been a top priority for me.

So Graduating college at Oregon State and moving halfway across the country to work for AGR presented me with a challenge. My fitness up to that point had always been supported by a routine. Practices on high school teams and then set schedules in college along with access to a top of the line campus fitness center made fitting exercise fairly easy. That all changed with a move to Kansas City. 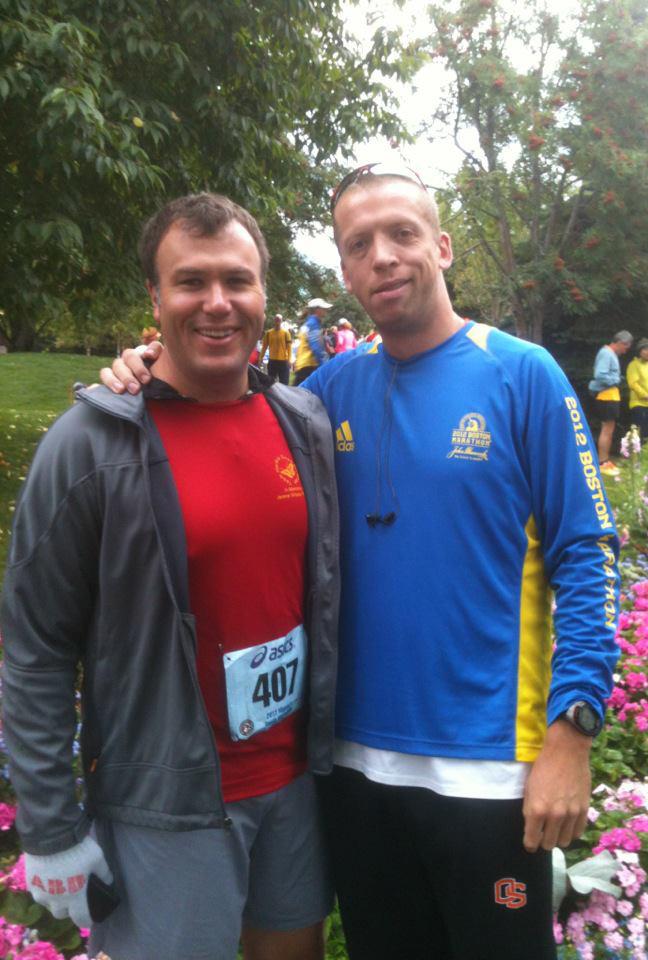 at the finish line of the Anchorage finish line with an AGR named Jason Wilson (he goes by Bear), Beta Sigma alumnus. I hired Bear to be a facilitator for Leadership Seminars in about 2010 and we went on to become great friends.

Pacing with my sister in the Columbus marathon

Anyone who travels for a living understands how difficult it is to navigate exercise into a daily routine because more often than not your days are anything but routine. Early flights, late work-related dinners, and lack of access to decent exercise facilities make it much more difficult. Now imagine not only traveling for a living but doing so by couch hopping at fraternity houses from campus to campus for weeks, and sometimes even months at a time. It definitely forces you to get creative.

There were plenty of times when one of the undergraduates was generous enough to let me use his student ID so I could go use the campus fitness center. Some days I had to try to find a decent route outside to get some running miles outside (take note—not a smart move during the Winter in Fargo or Madison or in the Summer in Tucson or Gainesville). Some days I was even lucky enough to convince a group of the guys to head to the rec center basketball courts for a pickup game. That was a great way to get exercise in and establish rapport with the chapter.

During my 8 years on the AGR staff, I was able to visit 69 of the 71 chapters (at the time) around the country and also probably visited a dozen other campuses as sites for potential new colonies. And each one of them provided their own unique challenges to getting my exercise in, but in most cases, I was able to find a way to make it work. 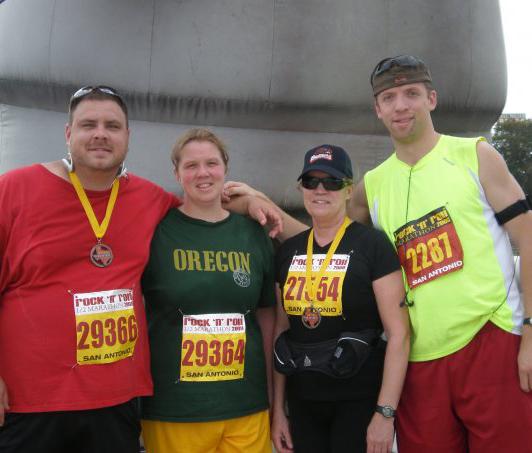 My sister, my brother in law my mother and I at the finish line of the San Antonio marathon

Even with all of this exercise dedication, never in my life did I think I would ever actually start running long distances. However, I remember running my first half marathon while living in Kansas City in 2008 and thinking there was no way I would ever want to or be able to run the full 26.2 marathon distance.  I was one and done, as they say. Turns out…I was wrong.

And after I started a running blog I never thought I would ever actually publish a book. Turns out…I was wrong about that too.

And when I think back on when running really started becoming a staple in my life, amazingly enough, it was when I was traveling for the Fraternity. It was a great outlet for me to escape the rigors of travel, but it presented a lot of challenges. I used to run 16, 18- and 20-mile training runs in the bitter Kansas City wind and cold at 10 pm on Wednesday nights because I was in charge of Leadership Seminars and Thursday I had a flight out somewhere and the weekend schedule didn’t allow for a run of that length. There was one instance when I was running in Lakeland, FL at Florida Southern at 1 am during a gnarly thunderstorm because that day’s schedule allowed no other window for me to get my run in. Or I distinctly remember when the LSU boys asked me to come facilitate a recruitment workshop on a Monday night. They invited me to come in early to enjoy a football game, and during my run around the campus lakes at 5 am before Saturday’s game I was asking myself if the thousands of people I ran past who were tailgating and heavily drinking had gotten up or were still up from the night before. Probably a mixture of both, I concluded.

Who knew running would provide me with so much. But then again, back in the Fall of 2000 when my dorm room phone rang and it was some fraternity inviting me to a pizza party, who knew where that would take me either.

The list of areas where AGR has helped me become a better man is endless. So, I guess it’s fitting that the start of my running life and the start of writing this book was during my AGR career. 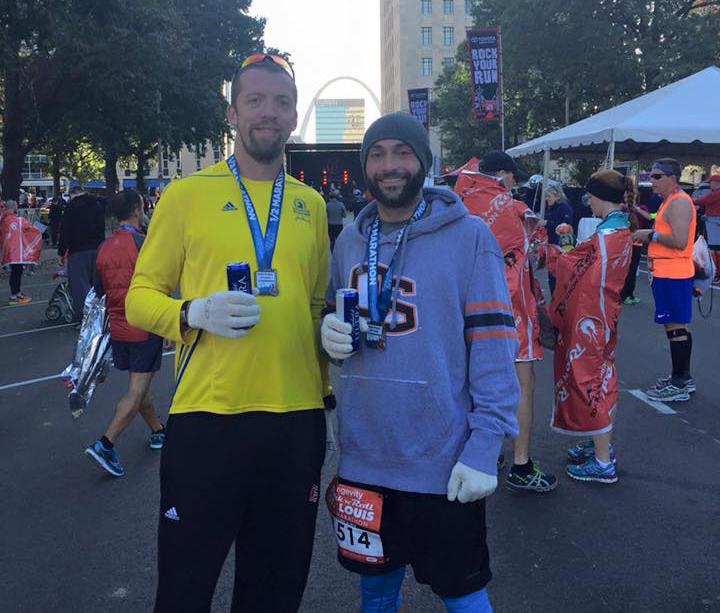 Finish line with friend Damian at the St. Louis Marathon